When you reach the end of this website, you'll know the following statement is true: It is extremely likely that the songs on this site are considered sacred and revered by countless extraterrestrial civilizations, on countless planets, in countless galaxies, and they have been for billions of years. Are you ready to join this Universal club? All you have to do is give the first song your full attention all the way to the final note.

These are The Cosmic Melodies. They are arranged using mathematical constants in base 12, played in the 12 musical tones.

A series of random notes from the chromatic scale typically sounds strange, and it's difficult to arrange into a melody that follows conventional harmonic aesthetics. The tonal center is "floating" and changes often, as opposed to something that has a defined key signature.

What is astonishing is that with minimal intervention, these mathematical chromatic digit sequences sound like they came straight from the mind of a composer.

If these videos don't show up, you can go directly to my youtube channel

The opening chords sound just like "Heart and Soul".
Right now, this is probably being sung, hummed, and whistled all throughout the Universe.

I like to think that somewhere out there exists a Cantina not unlike the one in Mos Eisley from Star Wars, where this tune is being covered by some extremely talented extraterrestrials on similar instruments to ours. Only so many ways to ring a string, resonate a reed, blow through a metal tube, alter waves on a synthesizer, and rhythmically bang on things.

The songs found in rational numbers must have primes in the denominator.

The constants, when translated into a series of notes, contain implied melodic phrases.  An example would be to ask you to put spaces in this series of letters.

The raw notes of pi and e in base 12 contain this kind of reason in the musical sense. It's akin to a "paint by number" with half of the lines filled in and a few colors already in place. There are infinitely many songs one could derive from the constants, but these arrangements optimize an inherent structure within the digits using "the rules" of harmonic progression that have dominated popular music for centuries.

It's easy to see that the tonal center is shifting throughout the piece, but the digits of pi are more "stable" than random data in this arena. If you consider the luck it would take to generate random sequences one could arrange into melodies as amazing as these, it's akin to throwing a billion dice up into the air, letting them land, then looking down at them from above and seeing the Mona Lisa. That's how well these melodies dance through the minefield that is the chromatic scale, or all 12 musical tones.

On the free-files page, there is a PDF (Deep Dive) that explains the more interesting aspects of the structure.

After you read and watch the rest of the vids, scroll back up here if you'd like free sheet music.

CLICK --> HERE <-- and download the files you want.
There's a tip jar at the bottom of this page if you want to contribute.

Here's what base 12 means. We use base ten, or decimal. Our standard system uses 10 characters to do math.

Base 12 means that we are using 12 characters.

There are other symbols people use. It's only important to understand the concept of "bases". 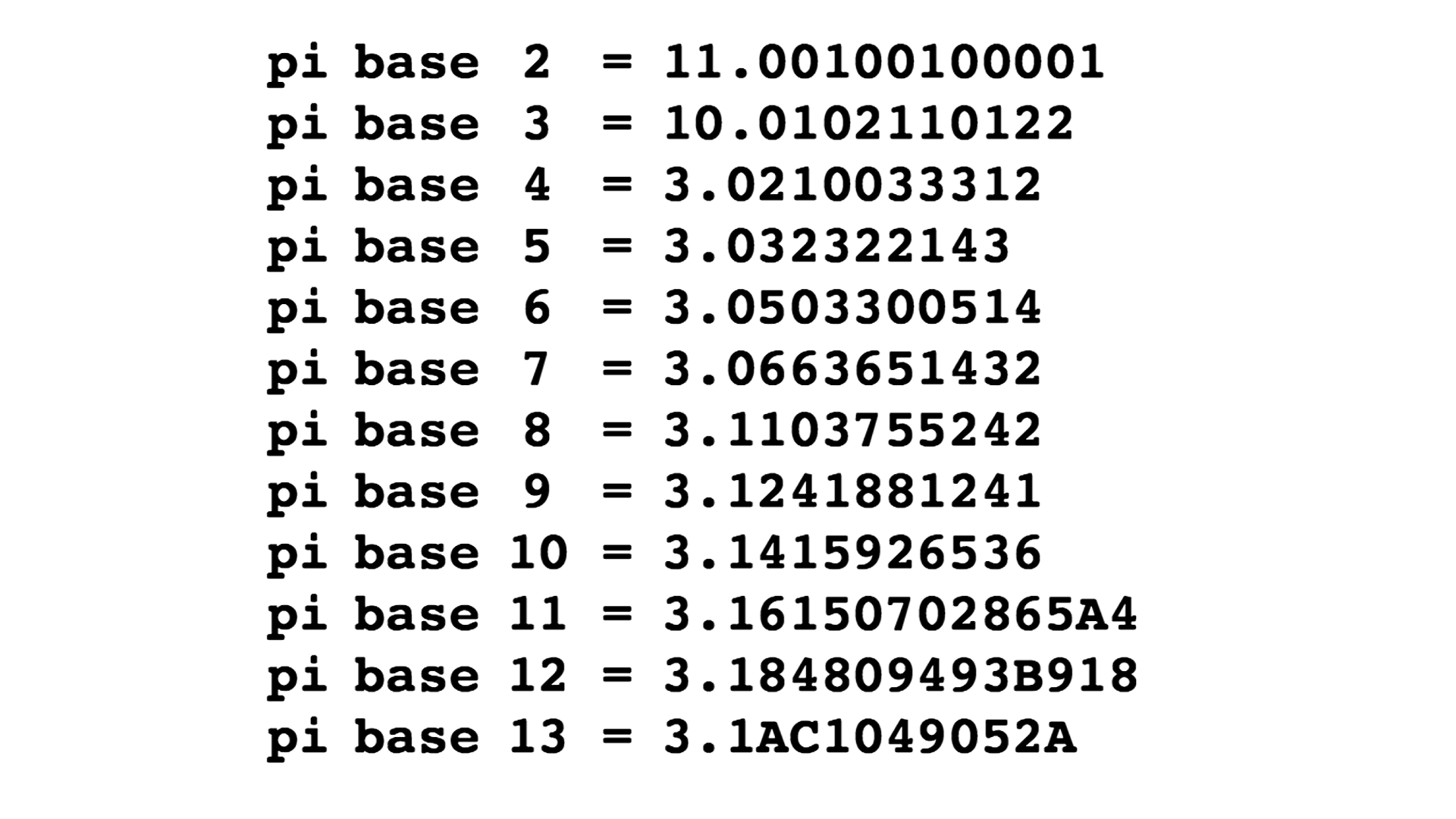 Then, to connect the math with the music, we line the base 12 digits up with the 12 musical tones.

From there, we can play base 12 digit sequences.  It didn't take much to reveal the underlying melodic phrases.  As you can see, many of the phrases contain long strings of straight quarter notes, which is the simplest possible way to play any sequence.

This is another interesting thing I discovered. If you look at the "tone" of hydrogen using a musical lens, and compare it to Planck time, they're nearly in tune with each other, and they're a major third apart. There seems to be an implied missing frequency. 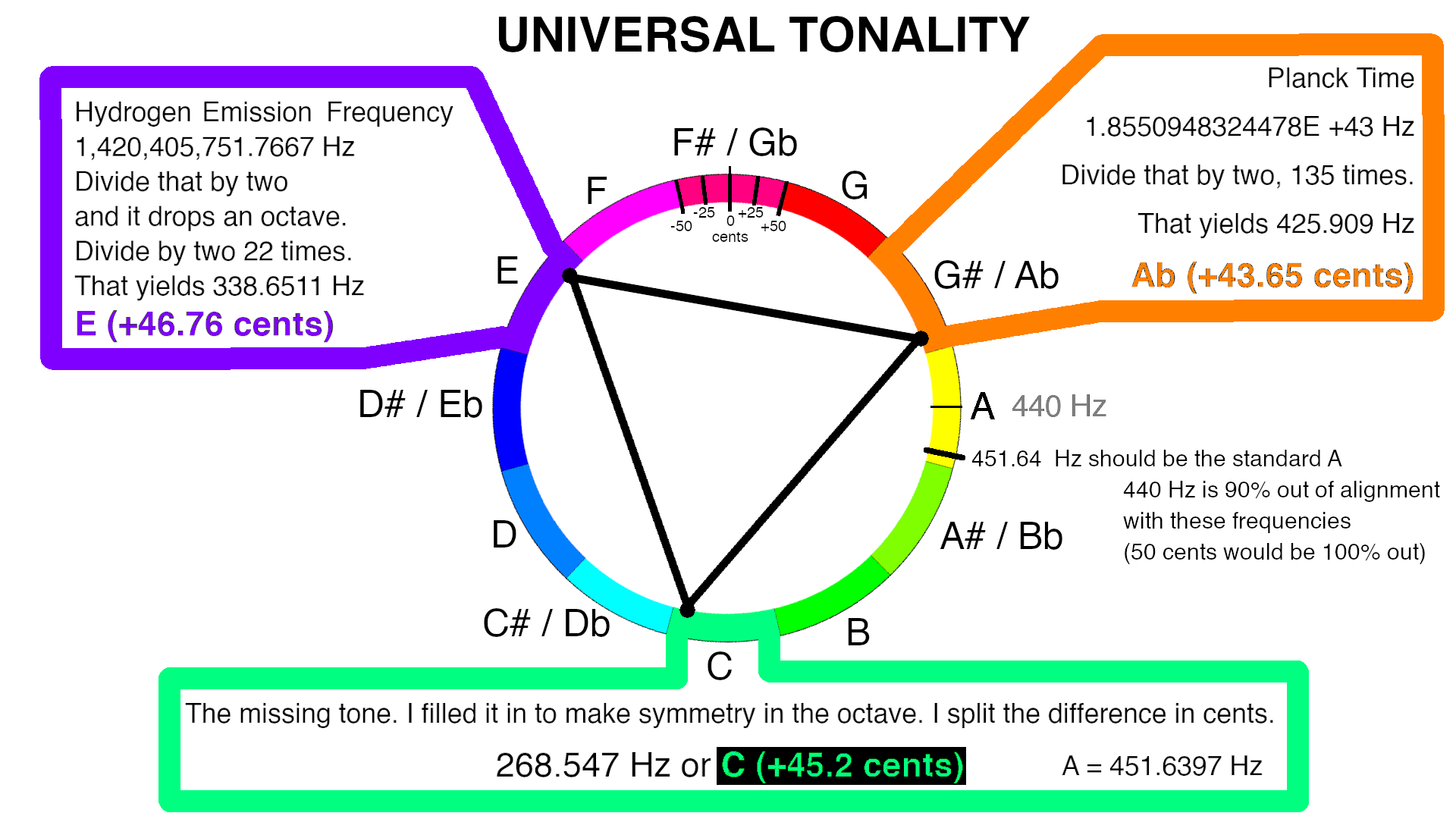 To make symmetry in the octave, the "missing" frequency is also a major third. It makes an augmented chord, in which all three intervals are major thirds relative to each other. The cents split the way they are means the third frequency is as closely tuned to hydrogen and Planck time as is possible. Any more sharp or flat, and it would have a tuning bias towards one or the other. It’s optimized for maximum harmony and minimum beat frequencies (phase or constructive/destructive interference)

Here are three versions of the pi song without numbers or explanation. There is only music, and colors. These three videos are the most Universal presentation possible of The Pi Waltz.

Also, these three versions are 330 digits long. The "symmetrical" one is the most polished.

Tuned to Planck-time
The “turn-around” at the end of this version grabs you right by the bottom of your guts.

Tuned to the symmetrical frequency

I wonder if the musically resolved value of pi (3.184809493E9186644) is a clue to solving the equations that describe the physical Universe, working out the "vacuum catastrophe", Einstein's "cosmological constant", or applied in string theory / M-theory.

I spent some time with that number, and found its rational expression is interesting. This value for pi is ever-so-slightly smaller than the actual value. 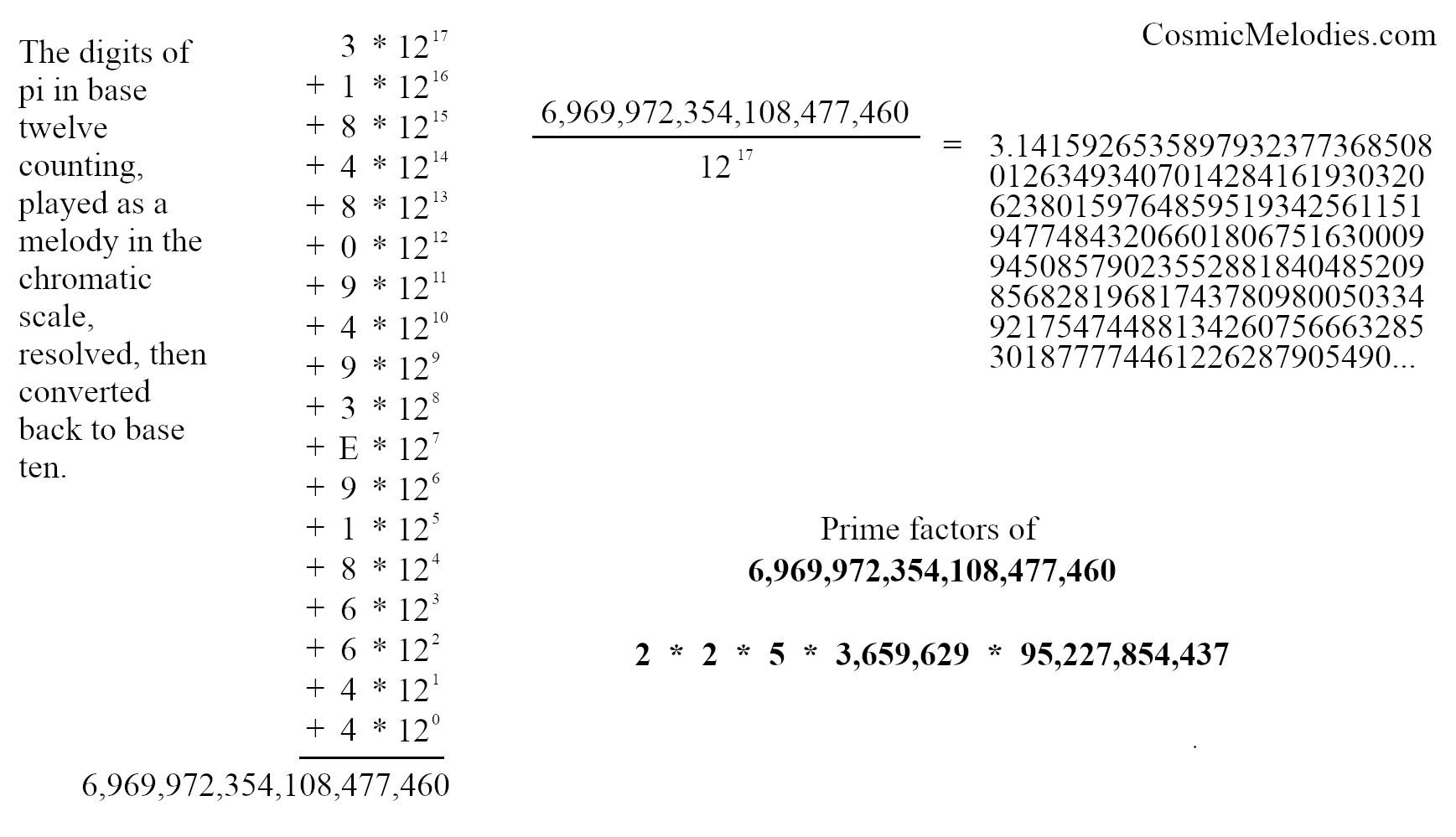 When I discovered the melody in pi and wrote the final note, one of the dozen thoughts I had in that moment was that this song may be the key to unlocking the ultimate technology and becoming masters of matter and space-time. This music is the most beautiful I can imagine. Can you imagine if it is also the key to ending detrimental consumption? It would be overwhelming to learn we live in that world.

Euler's number played as a melody and resolved can also be expressed rationally.

This value for e is ever-so-slightly larger than the actual number. 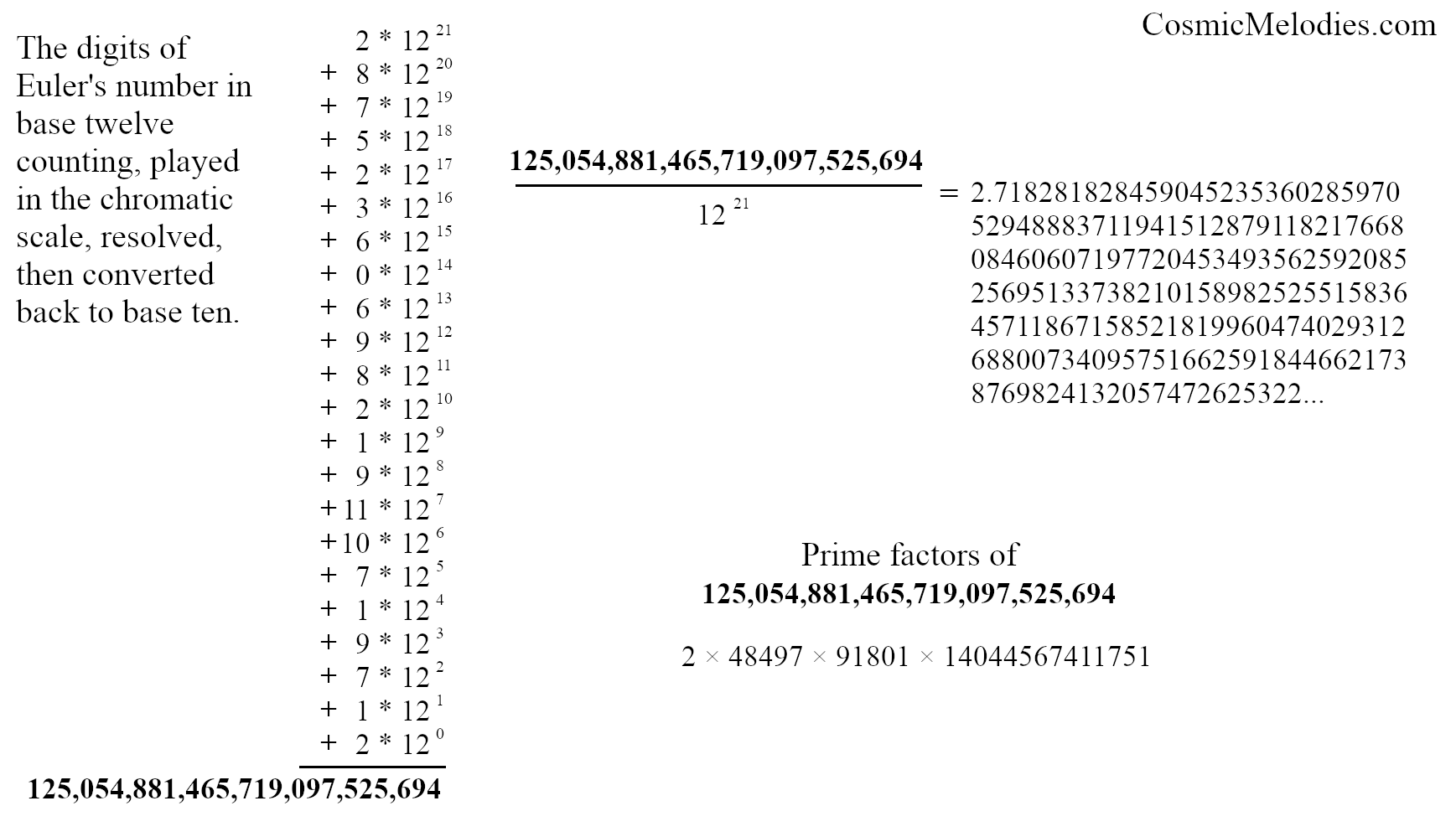 Here is a version of the first section of pi, played in a minor key.

This is an alternative arrangement to Euler's number. It's METAL!

Under construction New version in the works!

Here's a binaural meditation tone based on that missing tone in 3 ways.
This will induce Theta waves in your brain (the twilight state).

Do not drive or operate heavy machinery while listening to this.

It's heavy on the bass end. Turn your volume down, then turn it up after the tone starts.

Here is how the colors are derived. 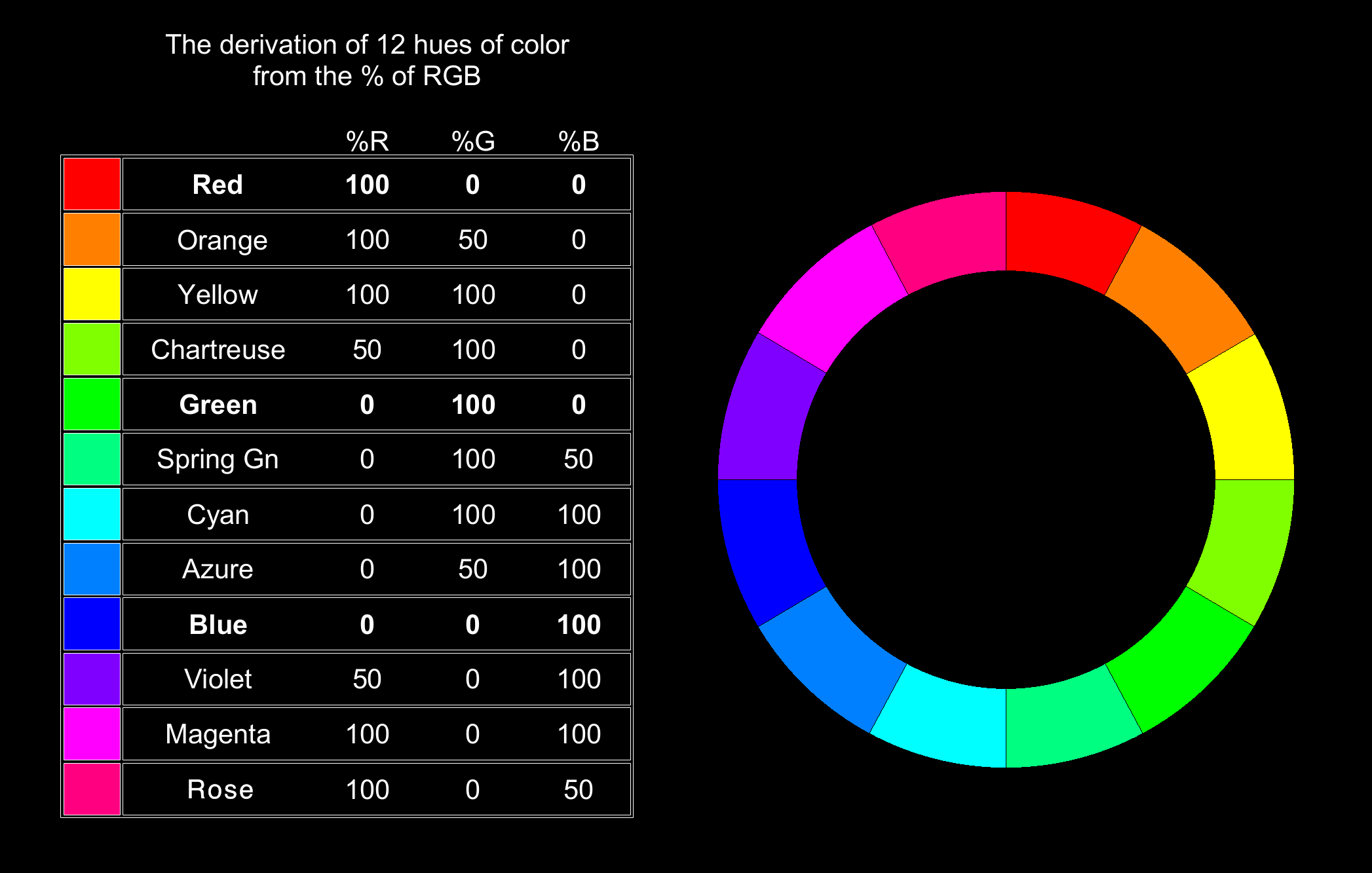 Here are those colors arranged in the circle of fifths. Many find it soothing. Every set of three neighbors is the maximum compliment while the clashing colors are across the circle. 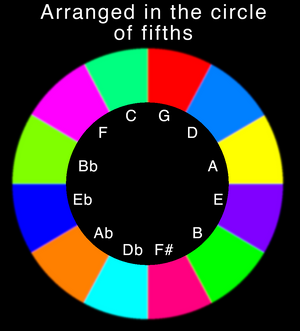 Thank you for visiting!

Be sure to check out my bio and the free files.

"Peace, Love, and Understanding to humanity, for all time."

The gentlest wind imaginable can speak loud enough to ring you like a gong.

You hear one single word, but the meaning understood in human language can contain entire ideas, or sentiments.

I also have a tip jar.
PayPal